Alexander Saady uses photography to cope with a complicated personal relationship to drag by capturing it’s biggest stars on film. After turning his love of theater into a short-lived drag career in his college town of Richmond, Alex turned to the big city to for inspiration and excitement. Follow his big city adventures on his Instagram @AlexSaady

What do you shoot with?

Why film over digital?

It’s easy to pop photos all night long but I find that my creative process is a bit different. Rather than taking photos of any colorful, sore-thumb thing, I take my time using my film and try to tell a bit of a story of the evening I spent out photographing. I look for candid interactions, things that inspire me, or things that sometimes just look good with the camera I’m shooting with.

When/how did you get interested in analogue format/photography in general?

I’ve kind of fell into the magic of shooting film over digital because of how special shooting over the course of an evening is. Especially when you’re not sure how your photos turned out. It pushes me to learn how to use my camera and what things to look for. That to me makes it more of an art and not just looking at a screen to make sure everything is in focus.

Whose stories are you trying to tell in your photos?

Nightlife in NYC is a very special thing. Working around so many creative and artistic people in a singular space is extremely stimulating as well. I’d like to say that I have the opportunity to photograph things and places that not everyone can see or access easily. Giving everyone a little slice of the magic that happens in New York’s nightclubs inspires me. 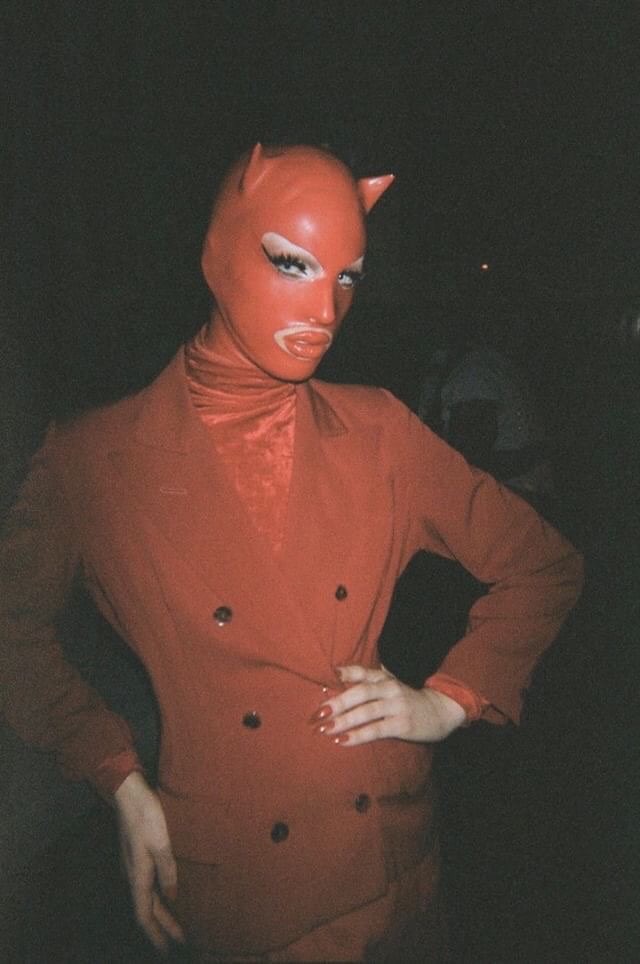 Who would be your dream model and why?

I’m lucky to say that I get to work around my dream model all the time. Amanda Lepore has influenced my artistic endeavors since I was young. I remember being 8 and downloading her music and hiding it from my parents. When I shoot individuals I tend to pursue those are extreme in presentation or those who are 100% outwardly themselves. Whether thats through body modification, makeup, tattoos or wardrobe, thats the most exciting is photographing people as their best selves. I love the polar opposites of the photos I pursue, intimate shots taken among family and friends to the complete opposite shooting crazy costumes, candid interactions and people in the crazy setting of a nightclub.

Tell me a little about your personal history of drag and how the RVA scene brought you to NYC. Are you still doing drag up there?

I started drag upon moving to college as my form of theatrical expression. I had performed on stage in high school and enjoyed the spot light. When I moved to Richmond, VA for college, I wasn’t able to as easily participate in theatrical productions due to my school and work schedule. I did drag for 3 years going through college while working and going to school full time. Drag gave me a really exciting perspective to myself that I don’t think a lot of gay men get to experience (either because they don’t actually do drag: just experience bad dress up on Halloween or for a party).

I lived a hairless, sequin and nail glue covered life for 3 years. I had terrible skin, got rejected by many romantic interests and even got approached sexually because I did drag. I also learned that drag costs a lot of time and money and I learned quickly that if I wanted to be taken seriously, I would have to invest. Hair, costumes, jewelry and makeup all added up to be a considerable portion of my monthly spending as well as carving out time to travel and perform to make money to feed back into looking fabulous. I’ve always gawked at pageant girls (Miss Universe, Miss World etc) and always thought show girls were the most gorgeous creatures on the planet (I still do!) and that maybe was the spark of what make my theatrical career turn towards drag.