It’s been my observation that although aesthetics generally were at their worst in the American 1970s (clothes, home décor, haircuts), it was an unparalleled golden era for filmmaking. In no other decade did American directors so thoroughly plumb the power of cinema: Coppola, Scorsese, Spielberg, Kubrick, Cimino, Malick, and even the disgraced Allen did most of their best work between 1970 and 1980.

However, the decade’s silly side is as memorable as its serious one. And some films have a high volume of both. Particularly in science fiction, for some reason; a surprising number of sci-fi films from the 1970s are incredibly self-serious. They bear deep intellectual ideas, but are executed with overly trendy production design and cringey scripts.

Here are five 70s sci-fi films of particular note, each ranked with a Pretentiousness Score. The higher the score, the more the film fails at getting the viewer to take it seriously. This failure specifically derives from a gap between the loftiness of the film’s ideas and the ludicrousness of its execution. 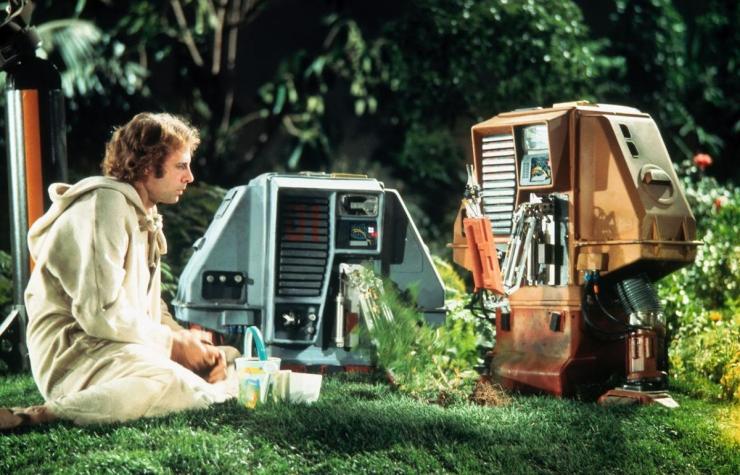 Hijinks ensue when Bruce Dern dons a caftan and looks after plants in space, to the point of committing three murders to preserve them. Few plants are left alive after the planet’s biosphere has become too hostile to them (apparently?), and the remains of Earth’s forests and flowers live in domes in space, cared for by rotating teams of white men. Also, robots, named after Donald Duck’s nephews. No women appear in this film whatsoever, not even computerized voices.

There’s a lot of Silent Running’s DNA in Moon and WALL-E, but it’s much more static than its descendants, and Dern and his environmentalism personify all the worst jokes about vegetarianism and tree-hugging. His method of trying to get the jockish other astronauts to give a damn about Earth’s last remaining trees mainly entails shouting and nurturing resentment. Not fifteen minutes in, Joan Baez sings a preachy ballad about children and sunshine. A sincere moral conflict about comfort, authenticity, and the shortsightedness of the human race, buried under decaying hippie rhetoric and obvious to-scale models.

Hijinks ensue when a ridiculously dangerous sport holds the monied class in thrall in a fascist, pill-addled future. James Caan is the champion of this sport who, because he won’t retire, destabilizes the whole society and causes the deaths of many, many people. This one’s interesting in part because the idea of a single hero is threatening to the corporate overlords who run the world. It’s an example (also seen in Twilight Zone episodes) of mid-20th-century art that presents communism as a threat in ideological manifestations that are unrecognizable today.

Norman Jewison (In the Heat of the Night) made this one, and he was infuriated that, upon release, everyone loved the sport depicted in the film, because jeez, you guys, it’s an allegory. Ha. Everyone knows allegories don’t look this exciting. Aside from the actual scenes of rollerball in play, the movie drags like hell, and Caan looks constipated throughout. The fonts are wonderful, and the corporatism is familiar and troubling; the collar flaps are unfortunate, the script is tedious, and the women are sexy lamps.

Hijinks ensue when the planet dries up, food sources shrink, the gap between rich and poor widens untenably, the infrastructure is stretched too thin, and no one wants to solve any of this. Not that that’s a familiar scenario. This movie is best known for the spoiler in its final line of dialogue, but there’s a lot more to it: the lure (and uses) of suicide in a dystopia, haves and have-nots, the endgame of overcrowded cities, the passion and danger of knowledge. It blew my mind when I was a teenager.

In re-viewings, I’ve developed the opinion that Soylent Green is a serious film masquerading as a broad genre picture, rather than the other way around. It has enormous beauty and frightening implications to its ideas, but it also has chase scenes and police drama, a couple of beefy-dude fights, plastic production design, and unnecessary pretty girls. It looks and quacks like its siblings on this list, and its ideas are really big, yet its seriousness is much more convincing. In his final role, Edward G. Robinson plays the gentle, luminous man he was in real life, rather than the dozens of cold gangsters he acted so well, while Charlton Heston sweats extensively.

Hijinks ensue when the human race, confined to domes after a vague catastrophe, restricts its lifespan to 30 years, on penalty of messy death. Michael York is tasked to leave the domes and root out a group of disobedient citizens. A scantily clad Jenny Agutter is involved, as is a T.S. Eliot-quoting Peter Ustinov and a for-no-reason Farrah Fawcett. This film can fill up a bingo card pretty well: it has lasers, teleportation, a shopping mall as a primary filming location, an all-powerful computer, and nonexistent underclasses.

Disclosure: I love this movie. Illogically, unapologetically do I love it. I love the idea of a society constructed around color-coded stages of aging, I love the campy Carrousel ritual, I love the dumb synthesizer music and the calm female computer voice and the bizarre shiny robot bellowing “Fish! Plankton! Sea greens! Proteins from the sea!” But I recognize that Logan’s Run belongs on this list, as a movie with philosophical pretensions and lame plastic models. Would we have a better society if people never got old? I really don’t know. Better by whose standards? And does that matter more or less than the cool outfits and pretty girls? It’s hard to tell, because the ideas remain a lower priority than the flashy production design.

Hijinks ensue when toxic masculinity spins out of control in a future that’s half Planet of the Apes and half David Lynch. This film is so weird, and so complicated in its premise, that I don’t even want to summarize it—I just want to urge you to see it for yourself, although I send you toward it with all possible trigger warnings. Sean Connery wears a red diaper, suspenders, and a long braid, and that is not the strangest thing there is to see in the first five minutes.

Some people hate this movie, or think it’s great, terrible fun (on the order of Showgirls), but I do not. I know no other movie like it, and I find it a fascinating product of a time when filmmakers had exceptional freedom and plenty of drugs. Besides, unlike the other four movies on this list, Zardoz rewards investment in its ideas. It’s strange, but it carries off its strangeness, if you can take it as seriously as it takes itself.

Pretentious 70s sci-fi films belong to a time when it was possible to see in the same glance good taste and terrible aesthetics, a decade during which a morally bankrupt president established the Environmental Protection Agency. Similarly, all of these movies boast committed actors and competent, even excellent directing in service of self-righteous ideas and outlandish storylines. In their contradictions, few of them have aged well, but then, few films become more interesting outside their original contexts, whether political or artistic.

The renaissance in American cinema during the 1970s helps these films to transcend pulp. Sort of. But having a better sense of humor about them than the films have about themselves makes them doubly worthwhile: fun, and thoughtful, in the same glance.

𝙀𝙭𝙥𝙡𝙤𝙧𝙞𝙣𝙜 𝙇𝙞𝙛𝙚’𝙨 𝘾𝙤𝙢𝙥𝙡𝙚𝙭𝙞𝙩𝙞𝙚𝙨 𝙞𝙣 𝙁𝙤𝙧𝙚𝙞𝙜𝙣 𝘾𝙤𝙡𝙤𝙪𝙧’𝙨 𝘿𝙚𝙗𝙪𝙩 𝘼𝙡𝙗𝙪𝙢, 𝙒𝙚𝙞𝙜𝙝𝙩 𝙤𝙛 𝙖 𝙍𝙤𝙨𝙚 - Peak fall vibes are here and along with it comes @foreigncolourva’s latest release (and debut album), Weight of a Rose.
𝙏𝙝𝙚 𝙅𝙤𝙪𝙧𝙣𝙚𝙮 𝙩𝙤 𝙁𝙞𝙣𝙙𝙞𝙣𝙜 𝙋𝙚𝙖𝙘𝙚 𝙞𝙣 𝙎𝙝𝙖𝙤𝙡𝙞𝙣𝙣’𝙨 𝘽𝙡𝙖𝙘𝙠𝙨𝙩𝙤𝙣𝙚
#TBT #ThrowbackThursday to Laurence Fishburne as Cowboy Curtis in Pee Wee’s Playhouse #yeehaw 🤠
We may have gotten some really super cool official POPSCURE merch for the really super cool @smartmouthbeer ☀️Juneteenth Festival☀️ happening this SATURDAY. Ya know…just in case you needed a little extra incentive to stop on by and have a good time 😉
THIS IS GONNA BE ONE FOR THE BOOKS 😎 COME GET HOT WITH US 🥵
We’re back with another round of amazing AAPI artists, this time with a special highlight on the wonderfully talented Ellen O. While Ellen is no longer with us, it doesn’t mean we can’t appreciate her musical contributions to this world. The singer/songwriter and multi-instrumentalist had a sound that was beautifully dark and mesmerizing. The Brooklyn-based artist uniquely crafted her songs to incorporate her classical piano background and love for hip-hop and trap music/beats. You can watch her Popscure Presents set/interview at the link in our bio. ❤️ Songs to know: “Sparrows & Doves,” “odd,” and “chicago”
%d bloggers like this: