Since Ming Ying Hong moved to Norfolk from St. Louis, her studio space has gotten a bit smaller. While it’s still able to accommodate her large-scale work, “there’s no room to look back at something,” she said, “there’s not a lot of editorial distance.” This added ambivalence in her process embodies the ethos of her latest exhibit, “Conditions of Uncertainty.” The collection of chaotic charcoal works is on view via popblossom at Work Program Architects in Monticello Arcade until March 16th.

“I just feel like it’s okay to be at a place where you’re [unsure],” Hong said of her exploration of “hazy” area between binaries, and the discomfort people feel within that space. Her explosive portraits are “visible but not tangible,” and hope to produce ambiguous viewpoints wherein meaning emerges.

While the immersive scale of Hong’s drawings reminded me of Mark Rothko, she felt his motives more defined. “When you look at a Rothko, he wants you to feel a very specific [emotion], there’s no other ways to interpret that,” she said, “with mine it’s placed in these grey areas, there’s a level of questioning happening, and the hope that in questioning something, someone’s experience or understanding of something becomes more expanded.”

“There’s a level of fear” Hong said of disjointed subjects, who are always “on the brink of disillusions, and in forming them they fall apart.” It’s something she explores across all mediums. A graduate installation piece Hong named after a Mark Strand poem called “Keeping Things Whole” filled a room with fog to seem as if “you’re kind of floating in space.” Barriers of the room’s walls became invisible in her attempt to “dissolve this idea of you as a person – this sounds cheesy, but so you’re one with the space.” 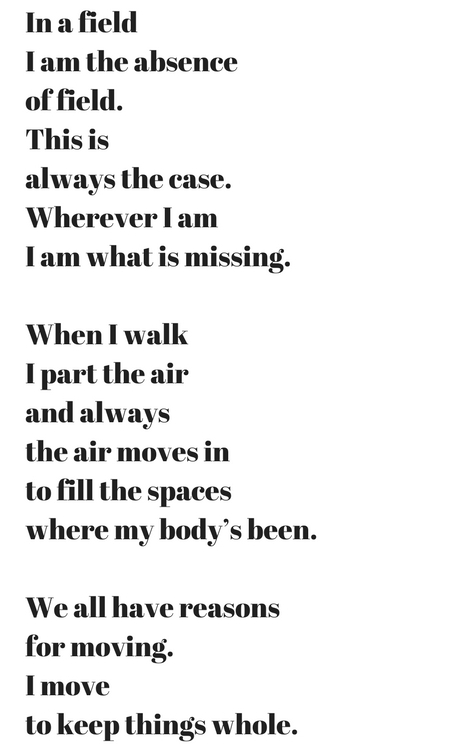 “My ideas drive my practice rather than being loyal to drawing,” Hong said about using multiple mediums. “I think everyone starts with drawing, as a kid that’s the most accessible art form,” she said, “It’s amazing that you’re able to make something…being able to make images suddenly emerge, to have your abstract ideas being formed on a page.” Intrigue with immersive abstractions, haphazard sculptures, and smoke-filled rooms, come from Hong’s interest in ecstatic states. “This moment where your body is there at the same time you’re not entirely,” she explained, “when the external world doesn’t become entirely understandable.”

“static states are near death”

“Wanderer above the Sea of Fog,” a favorite piece by Caspar David Friedrich she cites as a big inspiration, embodies this feeling. “It’s small but still depicts the sublime in a way that’s contemporary for its time,” she said, “now of course we have to make things bigger to do that.” In such a sensory saturated world, Hong’s scale is forcibly attention-grabbing. “I think people have enough attention span to do anything they want,” she said, “but in order to feel fear or awe I think you have to be experiencing something slightly new.”

With the natural world of “Wanderer” already explored time over, folks have turned to technology for new horizons. Not even amazed by and iPhone anymore, Virtual Reality has created a more immersive and exploitative recreation/invention of environments. With projections and other tech, Hong’s works take organic shapes and allude to natural phenomenon. She plays with the juxtaposition of “something you’re slightly familiar with that feels natural, but is nonetheless artificial.”

A new way she’s doing this is incorporating sex-safe silicone into portraits. The “squishy” material overlaying a drawing of Hong’s long-time partner will look “kind of like a disease,” and spell out his insecurities in braille. She hopes to “question that type of masculinity” with soft material and a vulnerable message. “I feel like that material is a simulation of flesh and a symbol of desire,” she said, “not only his desire to have a better body, but a yearning to touch flesh.”

Hong’s use of unique materials to mimic reality made her classic Romanticism influence even more striking. Her work reminded me of more contemporary artists (such as Cai Guo-Qiang, who shares Hong’s Chinese heritage and interest in explosions). However, ideas of art from centuries past manifest in Hong’s work “in a way that’s more in our times.”

For her, she’s still trying to convey the powerful and relevant feeling Friedrich’s painted exactly 200 years ago. The wanderer looking at endless earth from the top of a cliff embodies exact uncertainty she hopes for viewers: “the fight of being amazed, but nevertheless being fearful.”